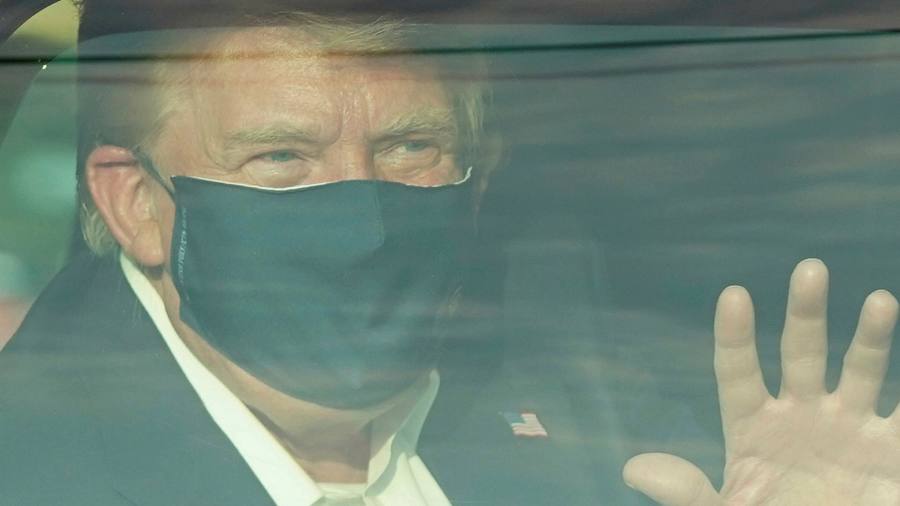 The White House chief of staff said he was “optimistic” Donald Trump would be discharged from Walter Reed hospital on Monday, saying the president’s health was continuing to improve after three nights at the medical centre.

“We are still optimistic that he will be able to return to the White House later today,” Mark Meadows told Fox News on Monday. “He continued to improve overnight and is ready to get back to a normal working schedule.”

Mr Meadows said the medical team treating Mr Trump at the military medical centre in suburban Maryland would make a determination later on Monday about whether to discharge the president.

Despite the optimism about the president’s diagnosis, the outbreak that has struck Mr Trump’s inner circle continued to spread, with Kayleigh McEnany, the White House press secretary, announcing she had tested positive for the virus.

In a statement, Ms McEnany said she had tested positive on Monday but was “experiencing no symptoms”. She added that she would begin to quarantine immediately.

Over the past three days, Mr Trump’s oxygen levels have dropped to levels that concerned doctors on two occasions. The president has also taken an experimental drug cocktail and remains in the middle of a five-day course of remdesivir, which has not been fully approved by regulators.

“If you look at the therapeutics which I’m taking right now, some of them and others that are coming out soon that are looking like, frankly, they’re miracles,” Mr Trump said in a video posted to his Twitter account at the weekend.

On Sunday, his doctors revealed that he was also being given an anti-inflammatory steroid called dexamethasone. The World Health Organization recommends the drug for patients with “severe” Covid-19, while the US National Institutes of Health recommends it for patients who require artificial ventilation or supplemental oxygen.

Mr Trump was hospitalised on Friday evening after testing positive on Thursday. During his three days at the medical facility, the White House and his main doctor Sean Conley have repeatedly evaded questions about his condition and on occasions made statements that appeared designed to play down concerns about his health.

Dr Conley on Sunday was forced to acknowledge that he had provided an overly rosy picture the previous day. Asked why he had not been more transparent, Dr Conley said he was reflecting the “upbeat attitude” of the president.

“I didn’t want to give any information that might steer the course of illness in another direction,” Dr Conley said on Sunday. “And in doing so . . . [it] came off like we were trying to hide something, which wasn’t necessarily true.”

Robert O’Brien, the US national security adviser, on Sunday said Mr Trump wanted to return to the White House but would stay at the hospital because he was approaching a critical phase of his illness.

“Day seven and eight are the critical days, so I think the doctors want to make sure they’re there for the president.” But hours later Mr Conley and the doctors at Walter Reed suggested that Mr Trump could be discharged as early as Monday.

The president sparked intense criticism on Sunday evening after he briefly left Walter Reed in an SUV to thank supporters who were gathered outside the facility. Critics accused him of conducting a selfish political stunt that put his driver and secret service team at risk of contracting the virus.

Buying a home is a goal for many Americans. How this bank is helping members of low- and moderate-income communities achieve that
Goldman Sachs wants to build an investor-friendly SPAC business following market bust
The Future Of The Rental Market For Landlords And Tenants
China may be moving toward easy monetary policy, but it will have to tread delicately
Evergrande is ‘just the beginning’: Professor says more firms must exit China’s property sector