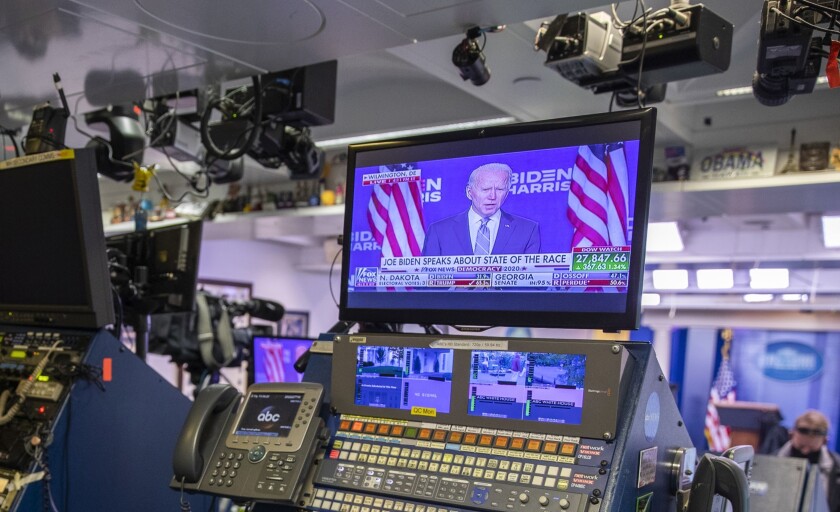 Biden’s Electoral College count rose to 264, one state away from achieving the 270, according to the Associated Press, which called the former vice president the winner Wednesday in closely fought races in Wisconsin and Michigan.

With the outcome still in question in Georgia, Nevada, North Carolina, and Pennsylvania, President Trump needed victories in all four to win a second term.

A Biden victory would be good news for the public finance industry because of his support of federal stimulus spending for state and local governments.

Biden also has outlined an ambitious infrastructure plan called Build Back Better that has many of the same elements of the muni-friendly Moving America Forward legislation passed by House Democrats that has been blocked by the Republican-controlled Senate.

The U.S. Chamber of Commerce suggested Wednesday that Congress should approve the bipartisan plan outlined by the House Problem Solvers Caucus. That plan includes $500 billion in new federal aid for state and local governments as part of a $1.5 trillion compromise package of COVID-19 emergency relief spending.

But Congress is unlikely to vote on a stimulus package while Trump’s lawsuits are pending, said Charles Samuels of Mintz Levin, counsel to the National Association of Health & Educational Facilities Finance Authorities.

“I would not think Congress would do anything while the outcome of this is pending,” Samuels said. “I don’t think as a practical matter that is going to happen.”

Samuels said he’s skeptical there will be any bond provisions in a lame-duck stimulus, but said who holds the presidency will make a big difference to the public finance sector next year.

The $1.5 trillion Problem Solvers Caucus proposal attempts to bridge the differences between Senate Republicans and House Democrats by automatically increasing its package by another $400 billion if COVID-19 hospitalization rates remain high and the progress in developing a vaccine does not meet certain benchmarks in early 2021.

On the other hand, the $1.5 billion also could be reduced automatically by $200 billion if those trends are better than expected. Those reductions include $130 billion less for state and local governments.

Additionally, state and local governments would be allowed flexibility in how they use the $130 billion which the group estimates as unspent from the CARES Act.

Other pieces of the package include $145 billion for schools and child care; $316 billion for direct assistance to families and individuals; $120 billion in unemployment aid; $100 billion for coronavirus testing and healthcare; $290 billion for small business and nonprofits; and $52 billion for broadband, agriculture, the U.S. Postal Service and the U.S. Census Bureau.

Democrats need a four-seat Senate gain under a second Trump term to wrest away the majority.

The uncertainty over Senate control remained after two Democratic pickups in Arizona and Colorado were offset by a Republican pickup in Alabama.

Democrats continued to have a narrow path to a majority because no winner was immediately declared in four Senate races involving vulnerable Republican incumbents in Alaska, Georgia, and North Carolina.

In Georgia, where there were two Senate races, one is headed for a Jan. 5 runoff because neither GOP Sen. Kelly Loeffler nor Democrat Raphael Warnock, a Black pastor at the church where the Rev. Martin Luther King Jr. preached, received the 50% of the vote needed for victory.

Loeffler was appointed to the Georgia seat following the resignation of Republican Sen. Johnny Isakson and is running for Isakson’s unexpired term.

Trump and the Republican-controlled Senate have stood by the 2017 Tax Cuts and Jobs Act as a major achievement during Trump’s first term. The tax bill terminated tax-exempt advance refunding.

If Trump is re-elected, his administration would seek to make permanent expiring provisions of the TCJA and also cut the capital gain tax to 15% from the current 20%.

Achieving either of those goals would be difficult because Democrats are expected to keep majority control of the House.

Biden, on the other hand, has a tax plan that calls for reinstatement of the top individual income tax rate of 39.6% for households earning over $400,000. Municipal bond industry experts predict that change would result in an increase in individual investor demand for tax-exempt bonds.

Biden would presumably support the public finance measures already outlined by House Democrats in their stalled Moving America Forward Act infrastructure plan while President Trump has not weighed in on the specifics.

Speaker Nancy Pelosi said recently that Biden’s Build Back Better infrastructure plan has many elements that are similar to the House’s infrastructure legislation.

Reinstatement of tax-exempt advance refunding, creating a new series of direct-pay bonds, and increased limits for small borrowers to use bank-qualified bonds are among the muni-friendly tax provisions contained in this wide-reaching package of legislation that Senate Republicans have blocked from consideration.

Tech Bubble 2.0 + Inflation Tsunami: How to Play Them Now
Streamlining The Real Estate Purchase And Sale Process
Billions price into primary, do little to move benchmarks
Stocks making the biggest moves midday: FedEx, U.S. Steel, Thermo Fisher, Moderna, Invesco and more
THIS Is The Room That Makes Or Breaks A Home Sale