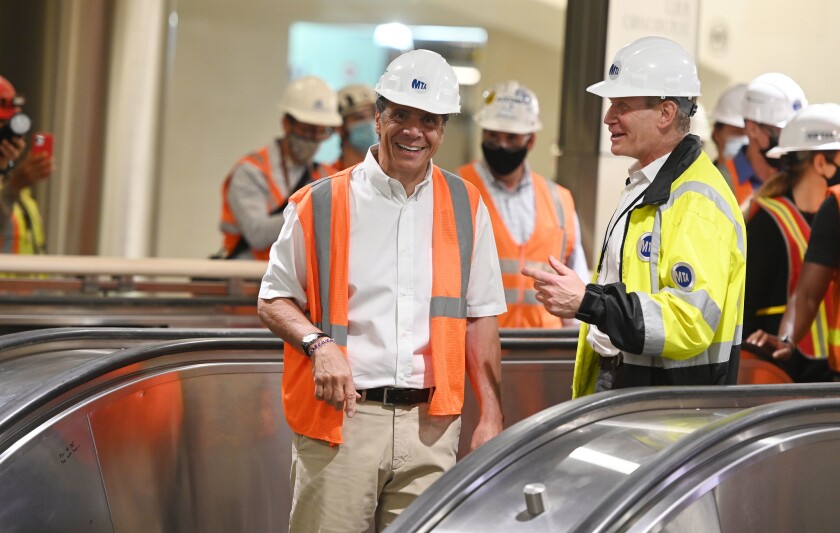 To no one’s surprise, the rationale behind Tuesday’s shuffling of the deck chairs at New York’s Metropolitan Transportation Authority extends 150 miles north, to the state capitol in Albany.

The leadership shifts for Patrick Foye, Sarah Feinberg and Janno Lieber all bear the stamp of Gov. Andrew Cuomo and his vision for the state-run MTA and other transit components in New York City.

MTA senior officials confirmed that Foye will leave as chairman and chief executive of the MTA to become interim president and CEO of Empire State Development Corp. the state’s economic development arm.

Veering from a 12-year-old practice, the authority, one of the largest municipal issuers with $50 billion of debt including special credits, intends to split the chairmanship and CEO positions, a move that itself would need legislative signoff.

Lawmakers introduced a bill late Monday, which is in the Senate rules committee. Under this bill, the CEO would no longer be subject to Senate confirmation.

Good-government organization Reinvent Albany, objecting to what it called a cover-of-night move, said the Senate and General Assembly should reject anther major change in MTA governance pending a public hearing and appropriate vetting.

“Reinvent Albany would be disappointed if the legislature agreed to this backroom deal given the immense amount of public discussion and consensus building that went into restoring the unified position in 2009,” said its senior research analyst, Rachael Fauss.

“This has created the incongruous situation of a fixed-term chairman with quite limited authority, and an at-will executive director who nominally reports to a board but is more akin to the head of a state agency,” the report said.

“More important is that the state Senate pass Sarah’s nomination,” said Nicole Gelinas, a senior fellow with the Manhattan Institute for Policy Research. “They can then work within their existing corporate structure to get everyone to do what they’re supposed to do.

“I think that the idea of Sarah as chairperson and Janno basically running the day-to-day operations seems fine. The question is whether either or both can develop an independence from Cuomo when there are very serious decisions that have to be made.”

Ridership and revenue plummeted over the past year amid lockdowns and stay-at-home mandates designed to combat the coronavirus that may be evolving into a long-term shift to remote work for many white-collar jobs.

An open question is how effectively, and independently from Cuomo, Feinberg and Lieber can implement structural changes if they wish, such as work rules and production standards.

Cuomo’s tight grip on the MTA, including its 17-member board, has been a storyline throughout his 11 years as governor, aggravating a long disconnect between the state-run authority and the city it serves.

Feinberg, in the latest tussle, raised her own profile with frequent criticisms of Mayor Bill de Blasio — object of a long-running Cuomo feud — over police staffing levels in the subways.

“The mayor’s just saying we’re going to get there eventually, like eventually we’ll get to enough, enough riders where we’ll hit that tipping point. I’m saying help us get there,” she said on one television appearance.

Andy Byford, Feinberg’s predecessor as NYC Transit chief, quit in February 2020, accusing the governor of interfering in his decision-making. Byford now manages Transport for London in his native Britain.

Mayoral board appointees have frequently chafed at what they consider gubernatorial heavy-handedness. A former board member, Veronica Vanterpool, once said board members felt “neutered.” Vanterpool is now chief innovation officer at Delaware Transit Corp.

Whether Cuomo’s command of the Senate is just as firm these days is an open question, notably after lawmakers stripped him of some COVID-19 emergency powers and while the governor faces multiple allegations of sexual misconduct.

State Sen. Jessica Ramos, D-Queens, said she would vote against the split-governance bill, and against the Feinberg nominations, saying it would concentrate excessive power with the governor.

“This could be the first big test of whether the state Senate is still giving carte-blanche to what Cuomo wants,” Gelinas said.

At Empire State Development, where he once chaired its downstate unit before running the Port Authority of New York and New Jersey, he will have the Penn Station expansion under his watch. Cuomo envisions the so-called Empire Station Complex evolving from the now-decrepit station underneath Madison Square Garden to a Hudson Yards-type “campus.”

“Something to think about … Empire State Development could be an arm of the MTA for a couple of years,” Gelinas said.