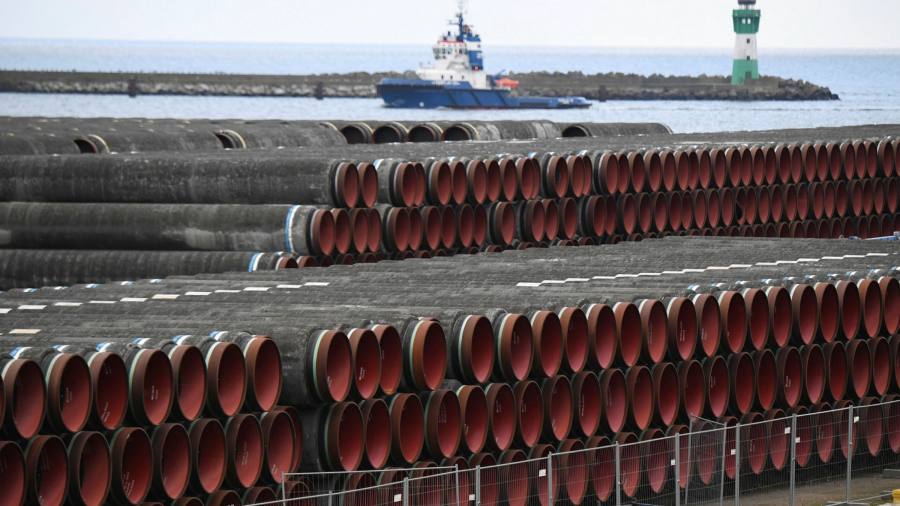 The US and Germany have reached a deal to resolve their longstanding dispute over the Nord Stream 2 pipeline, including a promise from Berlin to impose sanctions on Russia if Moscow threatens its neighbours’ energy security.

The announcement comes in the wake of a bilateral meeting last week at the White House between Joe Biden and German chancellor Angela Merkel, and will ease a diplomatic row between the two sides over Europe’s energy supply.

The construction of the Nord Stream pipeline, which will pump gas from Russia to Germany across the Baltic Sea, has long been a sore point between Washington and Berlin. US officials consider it Vladimir Putin’s geopolitical project to keep Europe dependent on Russian energy while jeopardising the security of central and eastern European countries such as Poland and Ukraine.

Under the agreement unveiled on Wednesday, Berlin pledged to impose sanctions on Moscow if its energy policies endangered Washington’s regional allies, which could include measures to limit Russian energy export capabilities to Europe, a US official said.

A US official said Berlin would set up a billion-dollar fund to promote Ukraine’s transition to clean energy, beginning with an initial $175m, while the US would help to promote and support investments. Berlin would make another $70m available to improve Ukraine’s energy infrastructure security, including building its cyber capacity.

Germany will also appoint a special envoy to help Kyiv negotiate an extension of its gas transit agreements with Russia beyond 2024 to allow Ukraine to continue to earn gas transit fees “for as long as possible”, a senior US official said.

“We’re committed to working together with our allies and partners to impose significant costs on Russia, including in the areas of sanctions and energy flows, if it engages in these malign activities,” the official said.

As the US and Germany released a joint statement touting their accord, Ukraine officials reacted furiously. Foreign minister Dmytro Kuleba tweeted that the country would begin consultations with the EU and Germany over the pipeline’s legality: “Notes to Brussels & Berlin already sent,” Kuleba added.

Ukrainian president Volodymyr Zelensky’s office said in a statement that “talks regarding the Nord Stream 2 project as a security threat for Ukraine and the region will be continued” during an August 30 visit by the Ukrainian leader to the White House, which the Biden administration announced just hours before the pipeline agreement.

Zelensky’s chief of staff Andriy Yermak held talks in Kyiv earlier on Wednesday with Derek Chollet, counsellor at the US state department. “Nord Stream 2 is a geopolitical weapon of Russia, which will definitely be used against Ukraine and Europe,” Yermak said in a statement.

In a call with Merkel on Wednesday, Russian president Vladimir Putin praised Germany’s “consistent dedication” to Nord Stream 2, which he said was “exclusively commercial and aimed at ensuring Germany and the EU’s energy security”, according to a Kremlin readout. The leaders discussed extending Russian group Gazprom’s commitment to moving gas through Ukraine after the current deal expires in 2024, it added.

Biden’s move earlier this year to impose sanctions against Russians connected with the Nord Stream 2 pipeline — while waiving punitive measures against the European operator of the pipeline — opened the door to the negotiations being finalised.

Biden has said he disagrees with Merkel on the merits of the pipeline, but his administration had to accept that it was nearly complete by the time he took office in January.

On Wednesday a spokesperson for the state department Ned Price said Biden had made “very clear” to Merkel last week that the US continued to oppose Nord Stream 2.

“Certainly, we think that there is more that the previous administration could have done,” a state department official said. “But, you know, we were making the best of a bad hand.”

The Co-Brokerage System Is Under Attack – And The Beneficiaries Are Not Who You Might Think
Binance CEO says he’s willing to step down as world’s biggest crypto exchange welcomes regulation
The national ban on evictions expires today. Here’s who’s most at risk
Bitcoin price drop to $37K has analysts wary of calling a ‘trend change’
July jobs report could be what gives the market its next big jolt in the week ahead